BAO’D UP!  A modern, young restaurant in Austin’s Mueller neighborhood that specializes in baozi, a category of Chinese bun. Other than the fluffy white buns, guests can also order spicy Szechuan fries or bubble tea. We recommend grabbing some baozi to-go to enjoy at the park on a nice day!

In this puzzle we are presented with a number of statues, each with its own letter, crossword clue, and a comparison of its weight to another statue.  For some clues it is not yet clear what statue is being compared to.  The best place to start is by identifying the crossword clues.  Once several clues have been solved, one may start to notice answers being repeated as part of longer answers.

Once this connection is made, one may notice the larger word in each pair includes a modifier for the shorter word to either make it larger (SUPER-, MEGA-) or shorter (MINI-, MICRO-,-ETTE).  In this way, we arrange the solutions as pairs of one large statue and one small statue (see columns 1 and 2 in the table):

Once this is done, we can start solving the weight clues to determine the weight of each statue.  This is done by realizing the weight clues for the heavier statues always state how much heavier this statue is than its smaller counterpart.  The best place to start is with the clues for C, G, H, and S.  These four clues are self-consistent and can thus be solved algebraically for the correct values.  From there we can solve for the rest of the weights by just focusing on clues that reference a statue we already have the weight for (See columns 3 and 4 of the table).

Finally, we identify which weights from the given list actually correspond to a statue and we use the associated letters from those statues in order.  This gives the phrase SIXBIGGEST.  Identifying the six heaviest statues on our list and ordering from largest to smallest gives the final answer BAODUP.

This week’s first-place Fastest Solver was Circles All the Way Down, followed by teams Plugh in second and Terrapin Iterated in third! Nice work, everyone!

And the winner of Best Photo was Team Alkaline! So cute! 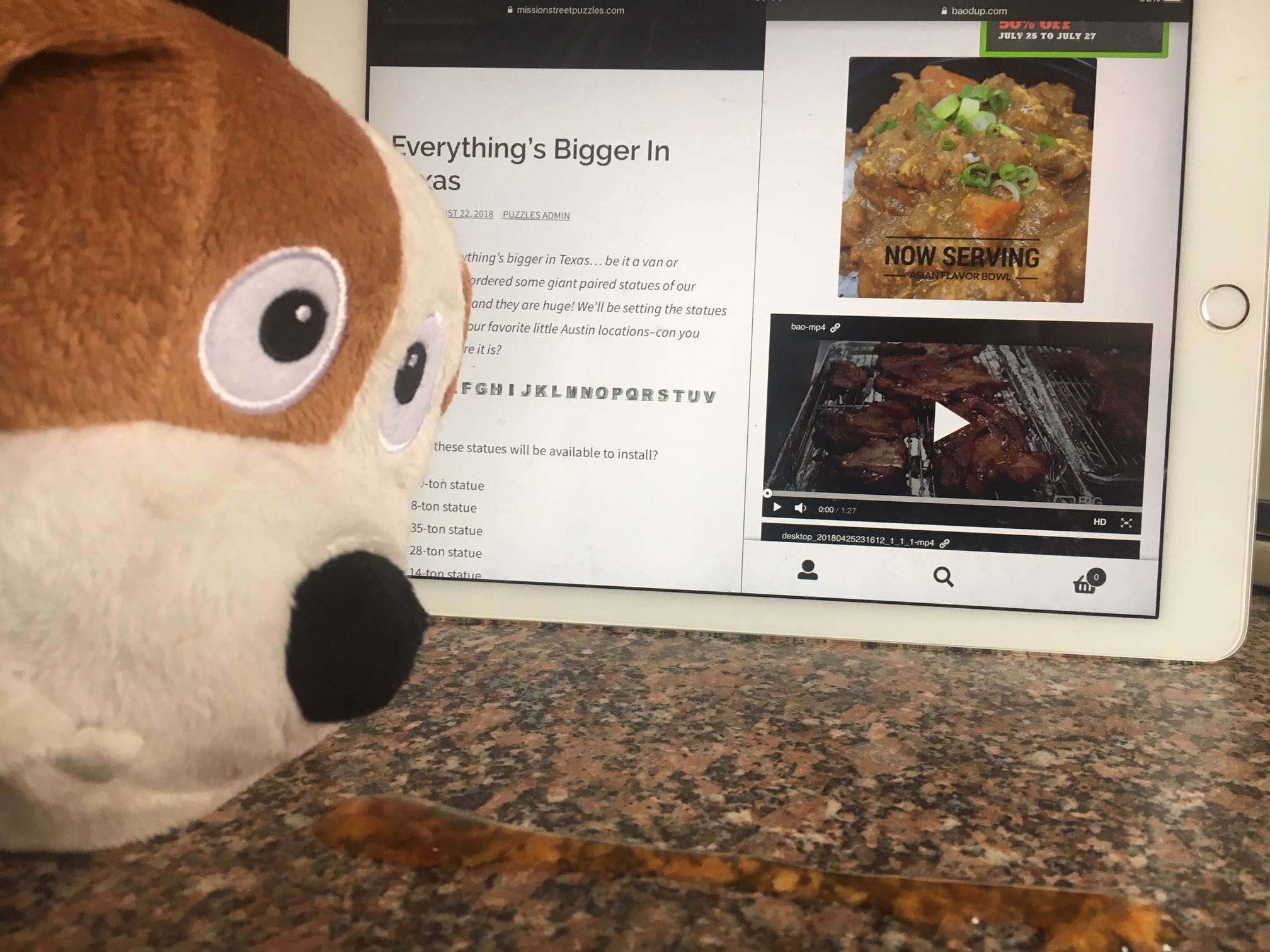 Also we have a fun fact for you this week!  A play-tester of the “Everything’s Bigger in Texas” puzzle pointed out that the clue pair:  little seed/lab dropper, can amazingly be solved by the pair above  (Pip/Pipette)  but also by the pair (Bur/Burette).  The alternate solution does not change the overall structure of the puzzle, which makes this fact all the more amazing!

And with that, the next puzzle, “Nursery Rhymes” has been posted! Good luck and happy solving!

Note: Bao’d Up is not affiliated with Mission Street Puzzles in any way.