And the correct answer to the “Compass Time” puzzle was…

SHINER’S SALOON! A western themed bar in downtown Austin, the Shiner’s Saloon offers both an indoor eating space as well as a rooftop patio.  The wooden tables, barrel chairs, and rustic metallic walls complete the old west atmosphere. They even have games for their customers from giant Connect-4 to Jumbo Jenga!  Interestingly, this Austin based bar hosts a large number of parties for the Pittsburgh Steelers!

There are a couple of parts to decode in this puzzle, but the simplest place to start is with the given clue phrases.  If one starts by solving down the clues in the left column, it quickly becomes apparent that the answers in this column are all cities.  Most of these can easily be found with a Google search, though a few may be best saved until later.  The right column, on the other hand, doesn’t seem to have a pattern as the one on the left did.  Rather, these words seem more random, and it is not always immediately clear what they are hinting at.

With some luck, a solver may realize the answers to the clues on the right are all names of sporting teams for the cities on the left.  One of the easiest teams to find to break into this puzzle is SEATTLE (Nintendo’s North American Headquarter City) SEA HAWKS (Osprey or Skua).  Once the connection to sporting teams has been made, it becomes easier to find answers to the clues in the right column by searching for sporting teams from the cities on the left.  One can also find any missing cities by comparing with possible team names from the right column.  The solved clues and team names are given in the table below ordered by the clues for city in the left column:

Once the teams have been paired with their cities, we are ready to move on the the extraction of the final answer.  A solver should notice that we have not yet used the colors of each clue or the compass given at the top of the page.  Since the compass directions have colors associated with them in the picture, we may deduce that the clues can each be given a direction by matching their color to the compass.  The trick is, some of the colors directly match one of the four given directions (North, South, East, West) but other colors are a mix of two directions.  These mixes give the four diagonal directions (Northeast, Northwest, Southeast, Southwest).  These directions are also given in the table for each clue.

There are certain common ciphers which Puzzlehunts often use (a good reference is this page), one of which is semaphore. Semaphore is a coded language that uses two directions like the ones that we have in our pairs to generate a letter.  For example, the answer CHICAGO BLACKHAWKS gives the directions Northwest and Southwest.  The semaphore signal with one flag pointed in each of these directions is the letter I.  All of the decoded semaphore letters are also given in the table above.

Finally, since these extracted letters do not mean anything, one realizes they need to be ordered differently.  Since the order of the given clues does not work, one may try alphabetizing the answers by team name.  When this is done, the final answer is found SHINERS SALOON.

This week’s first-place Fastest Solver was Cardinality, followed by teams davidsteinandfriends in second and The Lyricists in third! Nice work, everyone!

This week’s Best Photo came from Team Alkaline, who sends this cryptic message: 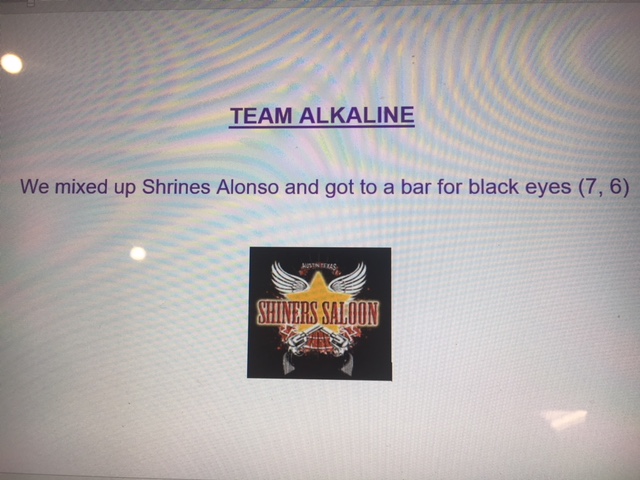 And with that, the next puzzle, “Boat Building” has been posted! Good luck and happy solving!

Note: Shiner’s Saloon is not affiliated with Mission Street Puzzles in any way.