PATIKA! A charming cafe situated in South Austin, Patika started as a little kart. Now, Patika boasts a comfy interior, decorated with rustic pieces. The minimalist decor offers a relaxing place to work (perhaps on puzzles!) while munching on a sandwich or sipping some coffee.

Amid → AMONG
*Catch, as with game → TRAP
Category, like of a song → GENRE
Character, relating to an actor → PART
Clothing of a Roman → TOGA
Compound after organic acid and alcohol react → ESTER
Cream that heals → BALM
Gets by merit → EARNS
Hard to digest material in diet → FIBER
*Laconic → TERSE
Rage → ANGER
Smoothed, as nails → FILED
*Something that might bleat → GOAT
Span → RANGE
*Swathe of grass-covered land → FIELD
Tropical stone fruit → MANGO

From these, we might notice that a significant number of these answers anagram to each other (AMONG/MANGO, TERSE/ESTER). However, not all of them do and we still haven’t found what’s special about the starred clues. A little leap lets us realize that starred clues each have two answers.

Now who’s William Moon? A quick search reveals he made Moon Type, an alphabet for those with not-so-stellar sight (the blind).

From this, it seems evident that we connect the stars based on the clues which anagram to each other. However, which clues represent which stars? At a glance, none of the images on the stars match the answers. We might list them out though, and get:

Somehow, some of these words seem familiar… We notice, likely starting from the one word clues, that a word from each clue anagrams to an image on a star. In fact, each clue has precisely one word with any anagrams at all. We can then group our clues like so:

Swathe of grass-covered land (WHEATS)
FIELD, GREEN
Category, like of a song (SNOG)
GENRE
Smoothed, as with nails (SNAIL)
FILED

Something that might bleat (TABLE)
GOAT, LAMB
Clothing of a Roman (MANOR)
TOGA
Cream that heals (LEASH)
BALM

Catch, as with game (MAGE)
SNARE, TRAP
Gets by merit (TIMER)
EARNS
Character, relating to an actor (INTEGRAL)
PART

Connecting the stars we get: 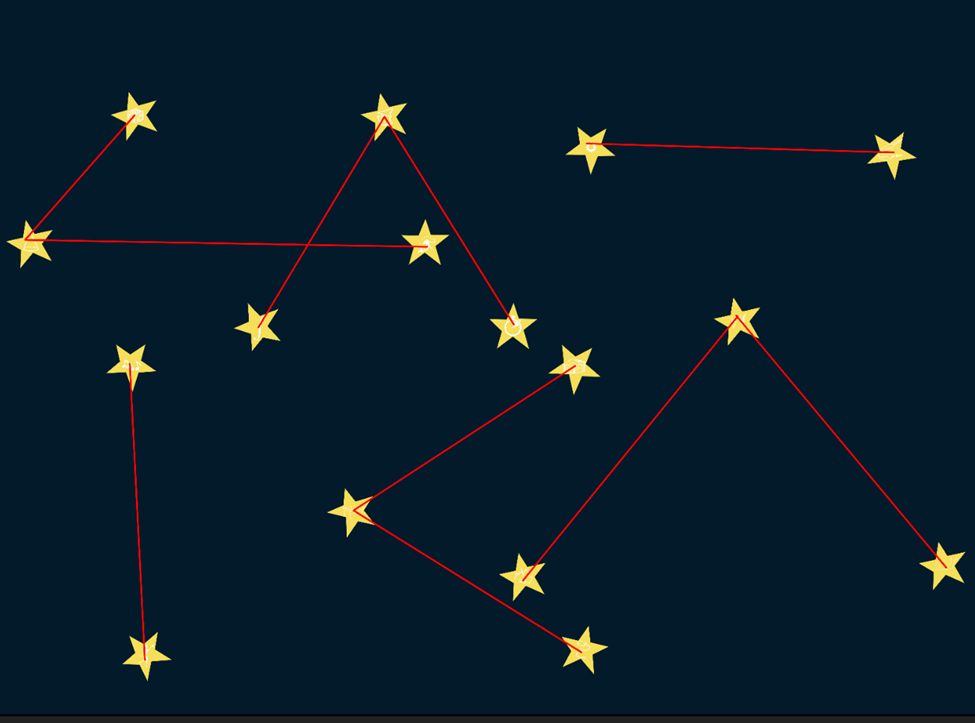 And decoding from Moon type, we get our answer, PATIKA.

This week’s first-place Fastest Solver was Codiak, followed by teams Please Clap in second and Circles All the Way Down in third! Nice work, everyone!

Congrats everyone! And with that, the next puzzle, “Feel Like Going to the Movies?” has been posted! Good luck and happy solving!

Note: Patika is not affiliated with Mission Street Puzzles in any way.