After a long day of cooking, Chef Mitchell Lynn Starr plopped down on the couch to watch some TV. Thank goodness he no longer needed to care about the sweetness of his cocoa powder or the purposefulness of his flour! But as he continued to watch this bizarre feature on channel 10549, he began to suspect that cooks all around the world were in grave danger… Where in San Francisco might Mitchell find some important clues?

“How do I submit answers?” Submit final puzzle answers to answers@missionstreetpuzzles.com with your team name!

“What if I’m stuck?” Email help@missionstreetpuzzles.com, or check out our Beginner’s Guide.

“How do I get T-shirts?” We offer T-shirts for the winning teams (Fastest Solver, First Photo, Best Photo) and a randomly chosen team! If you’ve already won a T-shirt, you’ll receive another color after five wins.

And the correct answer to the Stark Raven Mad puzzle was…

END_OF_DOCUMENT_TOKEN_TO_BE_REPLACED

Dark wings, dark words… With all of these ravens circling about, something ominous is surely about to happen. As the Head of House, it’s your responsibility to keep your House safe. Choose your ravens for your house, consult with the prescient three-eyed raven Bran, and decide where in San Francisco we should convene.

“Do I need to be a Game of Thrones fan to solve this puzzle?” No–in fact, the puzzle author does not watch Game of Thrones at all! However, keep in mind that, as always, online research is fair game and even encouraged.

“How do I submit answers?” Submit final puzzle answers to answers@missionstreetpuzzles.com with your team name!

“What if I’m stuck?” Email help@missionstreetpuzzles.com, or check out our Beginner’s Guide.

“How do I get T-shirts?” We offer T-shirts for the winning teams (Fastest Solver, First Photo, Best Photo) and a randomly chosen team! If you’ve already won a T-shirt, you’ll receive another color after five wins.

Note: As of Aug. 24th 11:30 a.m., corrections have been made to the 24th clue and to one of the sub-puzzles. Thanks to the teams that contacted us!

And the correct answer to the Woodland Wordplay puzzle was…

END_OF_DOCUMENT_TOKEN_TO_BE_REPLACED

Oh no, our summer camping trip has taken a turn for the worse–the forest is up in flames and we don’t know which way to go! This isn’t your typical crossword puzzle… From left to right, top to bottom, can you figure out what these critters are saying? 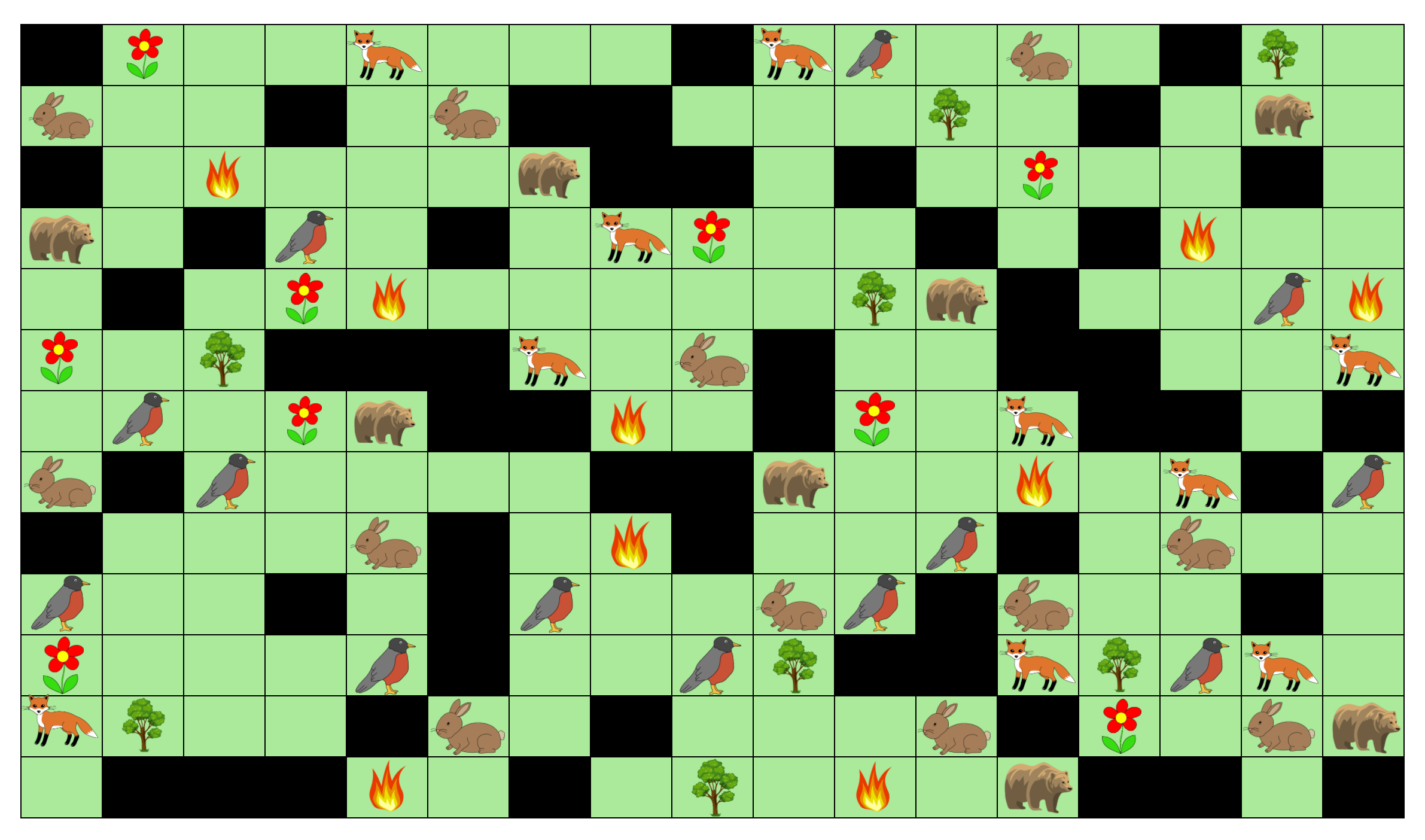 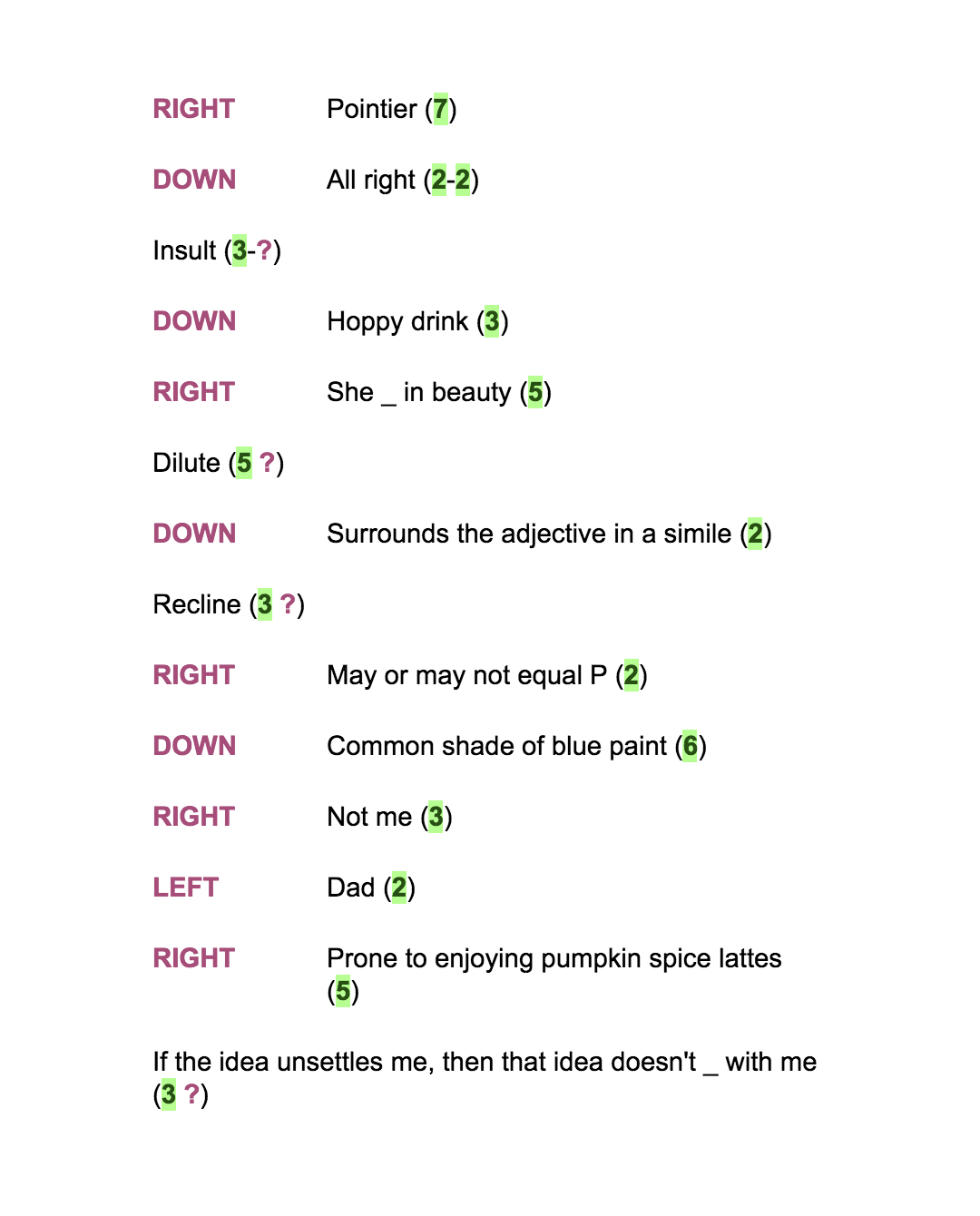 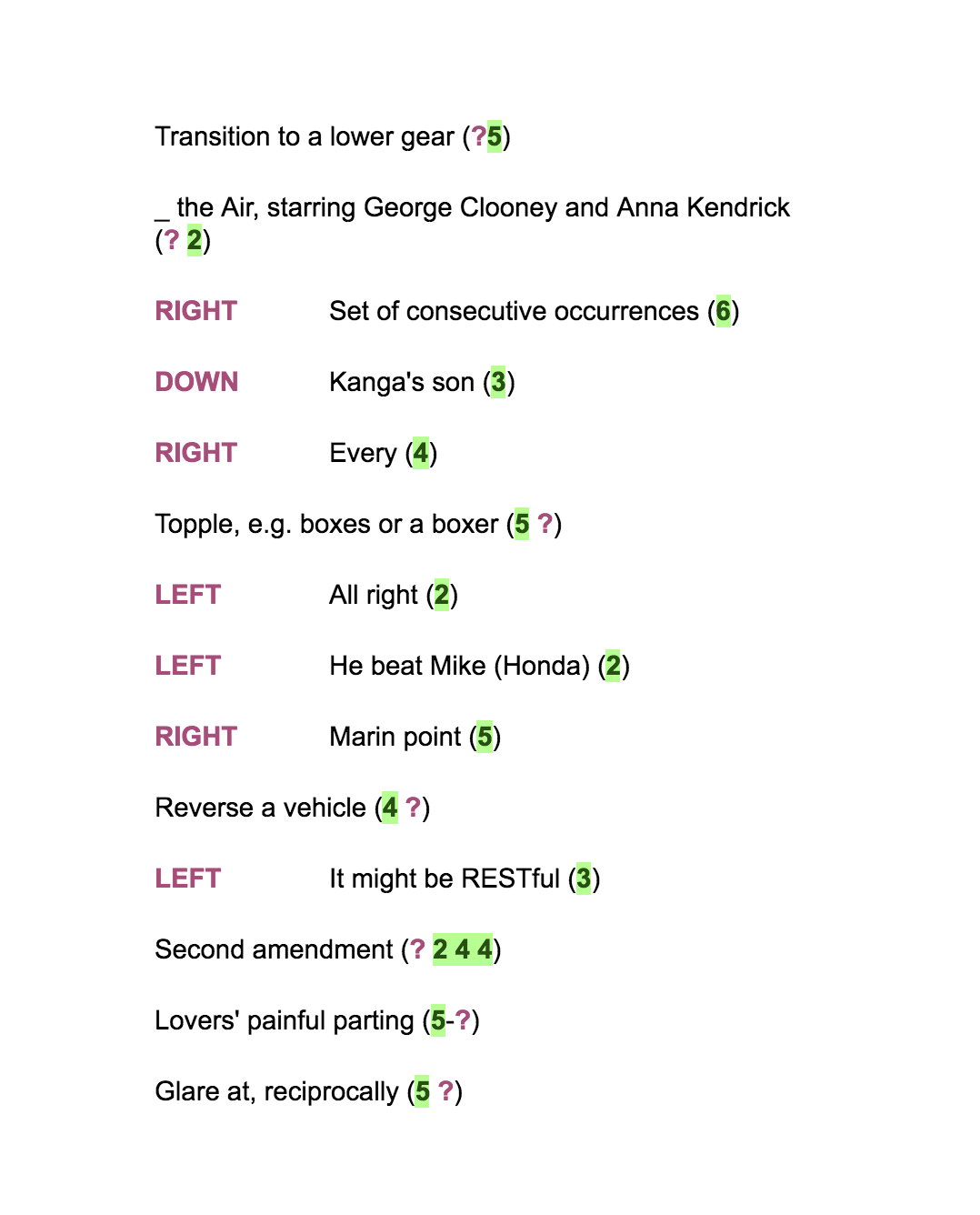 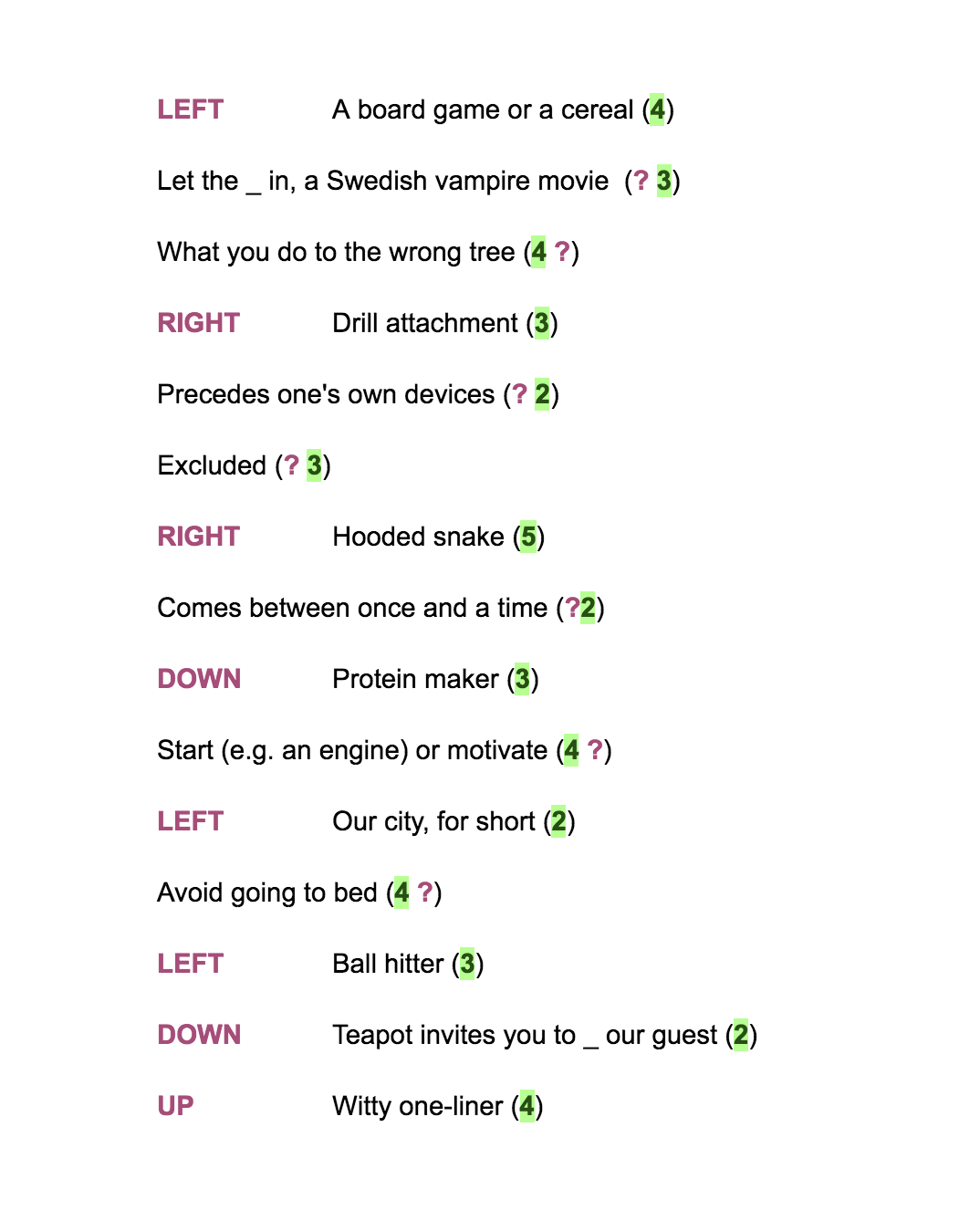 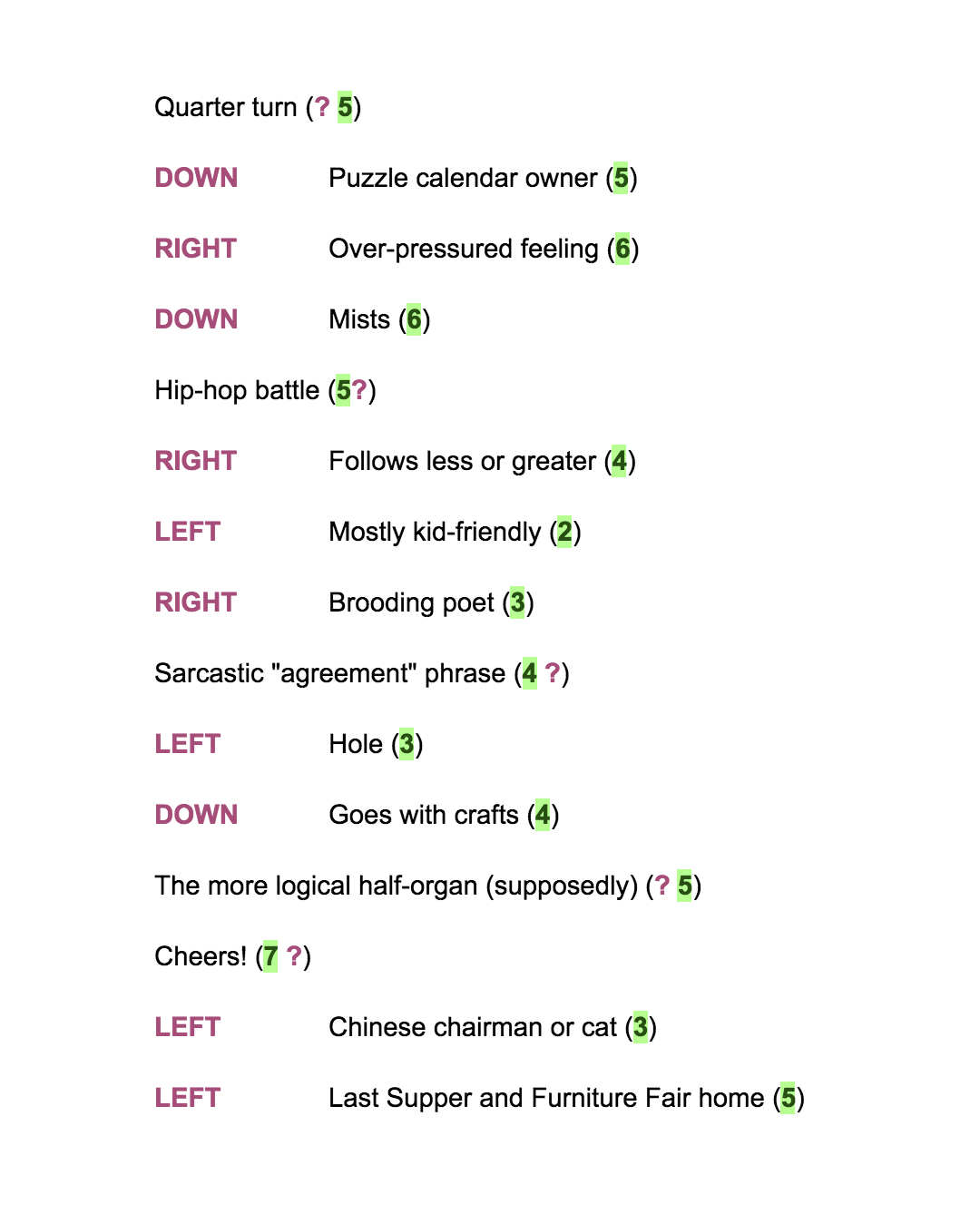 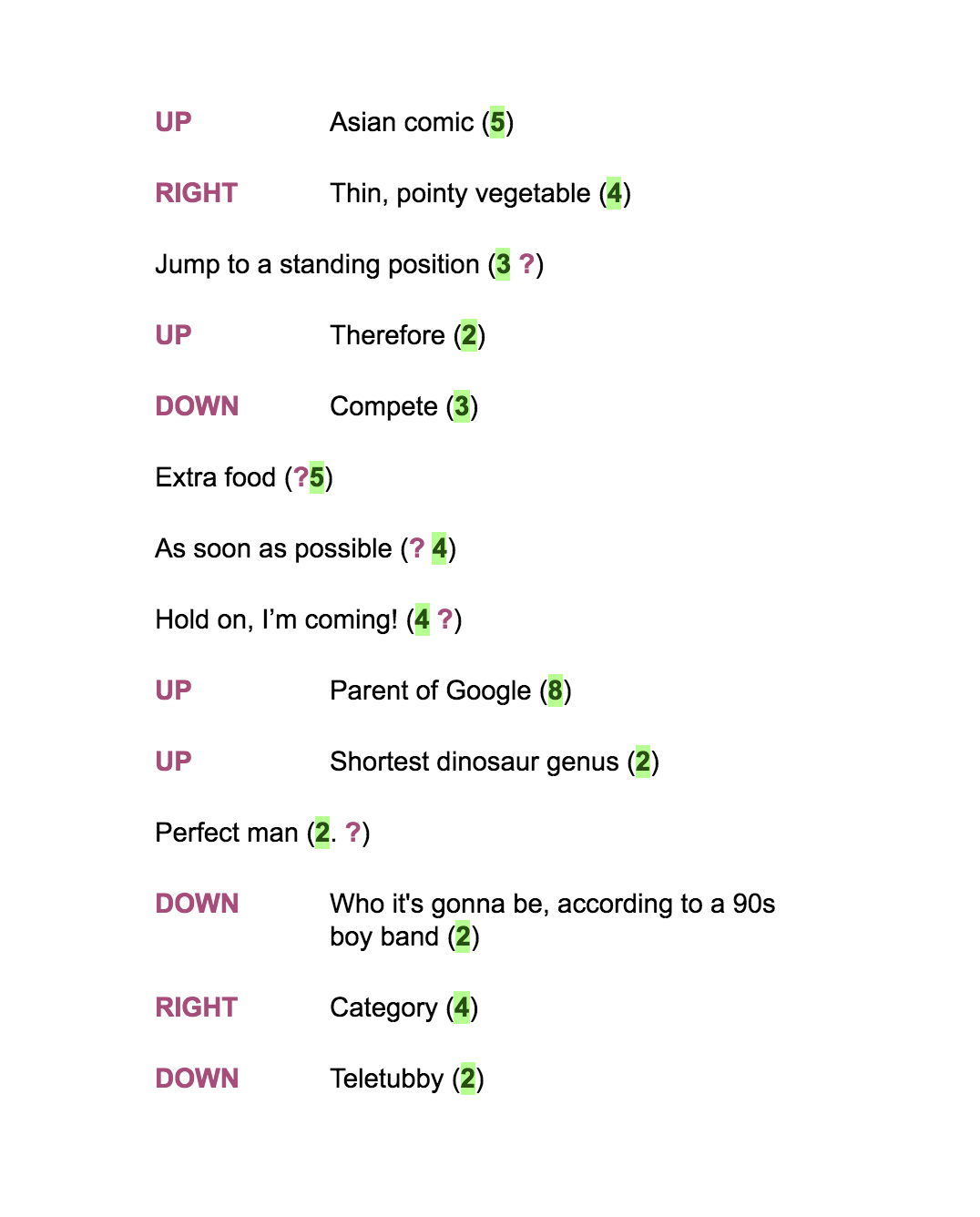 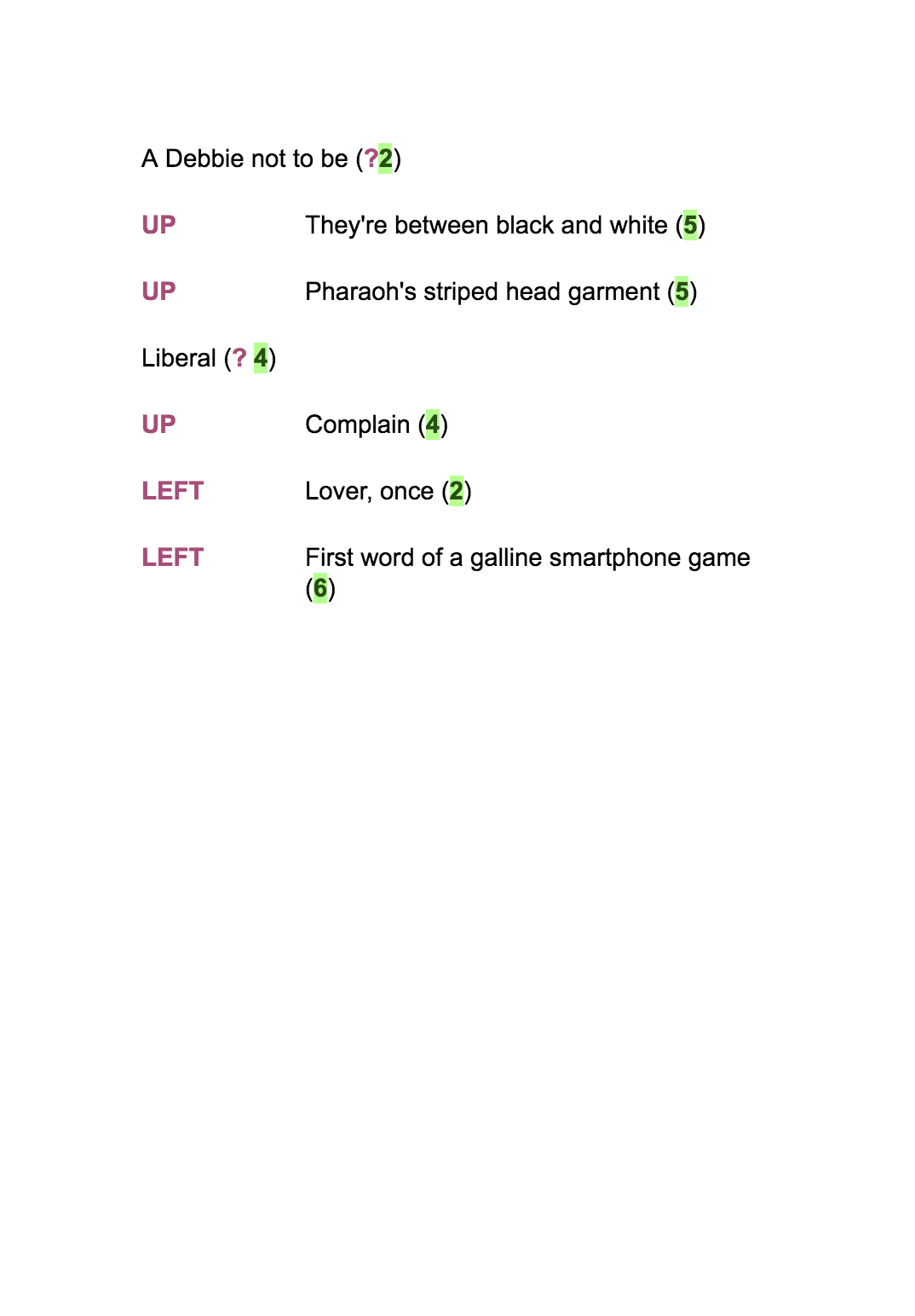 Once you’ve filled out the crossword, please use (only) the words in the grid to answer the following questions:

Finally, where in San Francisco can we be found cooling down after our forest fire adventure?

Note: A correction was made to the ordering of clues on Friday, Aug. 18th. The clue “Common shade of blue paint” was previously in the incorrect place on the list.

And the correct answer to the Fowl Play puzzle was…

END_OF_DOCUMENT_TOKEN_TO_BE_REPLACED

Angela and Betty were visiting a poultry farm, which had one quail, one chicken, one goose, one emu, and one ostrich. They learned that every month, the birds lay a total of 26 eggs, arranged in this funny pattern:

Click on the eggs to hear what they have to say. Assume that all eggs laid by the same bird are the same size.

And the correct answer to the Summer Reading List puzzle was…

END_OF_DOCUMENT_TOKEN_TO_BE_REPLACED

Bibly O’Phile used to have a well-organized personal library of her favorite books, but an earthquake came through and mixed everything up! All that remains are these slips of paper from her bookshelf. What up-and-coming authors have just published their debut works? What famous books were their inspirations? To pay for the damage, Bibly sold her whole collection…an…

Partying for Peace
A diverse group of Chicago youngsters–black, Latino, and white–get down in hopes of better understanding one another.

Trophy Wife, Trashy Husband
Each of these beautiful women either can or can’t net common, lazy, daft, needy suitors. Who has the right mix of looks and personality?

Death of the Cuddles
In this tragically candid epic, injured red pandas and snow foxes struggle to survive.

Ode to My Darling
The more I know her, the more I adore her. As my lady gains in beauty and wisdom, I lose myself in her eyes. You won’t be able to put down this enchanting romance.

Progressive Candidate
Ever since the right wing shut down his local campaign, this man has been on a determined quest to redeem himself and his party. This biography provides an exclusive look behind the scenes of his campaign.

Why Everyone Should Travel
In this witty, entertaining travelogue, you can practically hear the cheerful bagpipe melodies, taste the renowned cheesy pepper roll, touch the exotic baboon fur, and smell the sweating gondola rowers. This comprehensive reference is all you need for your next vacation around the world.

Jitterbug Joey
Young Joey Juniper fidgets a lot, is routinely mocked for his tics, and slips into depression–but eventually confronts his bullies in a surprising, witty way.

The Ratio
How much do you suppose the fat, short men weigh in comparison to their taller thinner counterparts? This author is on a quest to find out.

Lou-‘Easy’-Ana: The ABCs of the L-shaped Land
In this up-and-coming state, they brag about their wild parties, delicious comfort food, and uniquely hospitable culture. Discover Louisiana in this brand-new travel guide.

She Looks Like Me, Only Prettier
Ugh, hotter siblings are the worst! Vanessa and Patricia duke it out in their quest to be the sexier sister.

The Poker Game
Jessica enters the Celebrity Jackpot Poker tournament on a whim, and, to everyone’s surprise, earns a prize: signatured manuscripts and original paintings by Shakespeare, Picasso, Van Gogh, and more. Suddenly, she has more cash than she knows what to do with. Will her newfound riches be a blessing or a curse?

Half-Truths and Untruths
It all started when I suggested, “Let’s tell Carter the truth: he flunked the exam! It’ll be funny!” From there, the fibs grew out of control.

Toothy Terror
Jon once hunted sharks for teenage sacrifices on the island of Horrowaii. Now, he is the hunted.

A Celestial Voice
As the Heavenly Father was creating the universe, one free angel sang beautiful melodies. Read about her ascension to fame.

Aug. 1st (signings until 14th)
Seymour Sytes
Growing up, Sytes always prided himself on being a great “Walker in Others’ Shoes.” In particularly, he empathized deeply with the struggles of disenfranchised black women–hear more in his upcoming talk.

Aug. 2nd (signings until 16th)
Don Keifer-Mayer
In this intimate talk and book signing, Keifer-Mayer chats about his personal life, his writing, and his passion for the Bronte sisters’ work.

Aug. 2nd (signings until 17th)
Q. Tannimals
This book talk with Mr. Tannimals will be paired with a special screening of one of his favorite movies, starring Keira Knightley.

Aug. 3rd (signings until 14th)
Marty Graw
In Graw’s spare time, he plans elaborate parties reminiscent of upscale 1920s society–so this networking event and book signing is sure to be a classy affair.

Aug. 4th (signings until 15th)
Neil B. Bownsin
Bownsin, an up-and-coming novelist, discusses how his hero, Dan Brown, has impacted his own work in the modern technological age.

Aug. 6th (signings until 15th)
C. D. Vowering
Vowering talks about her latest novel, inspired by parables of African colonialism. She will be accompanied by her daughter Nellie.

Aug. 6th (signings until 15th)
Meg Emilia Nair
Nair will present a special reading of the coming-of-age stories that inspired her growing up as a young Hispanic woman, providing her with hope in the hot waters of Mexico.

Aug. 6th (signings until Sept. 4th)
Mary A. Dumslaub
At this event, Dumslaub talks about how her career was inspired by a contemplative two-wheeled road trip.

Aug. 8th (signings until 16th)
Liza Lott
Meet the author and learn some fun facts like her favorite movie (“Easy A”) and color (red)!

Aug. 9th (signings until 11th)
Trudy Voe-Shen
This author talks about some Faulkner works that have inspired her writing throughout the years, particularly his “tour de force.”

Aug. 9th (signings until 15th)
Karen & Taryn Upda Clubb
This talk, in which this literary duo engages in some breezy banter about one of their favorite literary classics, will be followed by a screening of a 1939 film adaptation.

Aug. 11th (last day for signings!)
N. V. Ying-Hur
Growing up, Ying-Hur loved to read popular economics literature, especially ones delving into specific Doomsday events like financial crises. Nowadays, she hopes that her own books are equally accessible to all readers.

Aug. 17th (signings until 19th)
Ana Tomicsize
This author talks about her deep research into Shakespearean literature, and the ten things she hates about more contemporary writers.

Aug. 17th (last day of signings!)
Carrie Oakey-Starr
Oakey-Starr discusses her favorite children’s novels with young female protagonists, especially ones who are orphans, and her travels to the countries like Japan where they are popular.

…ook by book. Where is Bibly reading right now?

And the correct answer to the Say Uncle puzzle was…